One scratch on top

The game Fable is missing. There's no case for project gotham

From Wikipedia, the free encyclopedia
Jump to: navigation, search
This article is about the "Xbox" brand. For the 2001 console, see Xbox (console). For other uses, see Xbox (disambiguation).

Xbox is a video gaming brand created and owned by Microsoft. It represents a series of video game consoles developed by Microsoft, with three consoles released in the sixth, seventh, and eighth generations respectively. The brand also represents applications (games), streaming services, and an online service by the name of Xbox Live. The brand was first introduced on November 15, 2001 in the United States, with the launch of the original Xbox console.

The original Xbox was released on November 15, 2001 in North America, February 22, 2002 in Japan, and March 14, 2002 in Australia and Europe. It was Microsoft's first foray into the gaming console market. As part of the sixth-generation of gaming, the Xbox competed with Sony's PlayStation 2, Sega's Dreamcast (which stopped American sales before the Xbox went on sale), and Nintendo's GameCube. The Xbox was the first console offered by an American company after the Atari Jaguar stopped sales in 1996. The name Xbox was derived from a contraction of DirectX Box, a reference to Microsoft's graphics API, DirectX.[7][8]

The integrated Xbox Live service launched in November 2002 allowed players to play games online with or without a broadband connection.[9] It first competed with Dreamcast's online service but later primarily competed with PlayStation 2's online service. Although these two are free while Xbox Live required a subscription, as well as broadband-only connection which was not completely adopted yet, Xbox Live was a success due to better servers, features such as a buddy list, and milestone titles like Halo 2 released in November 2004, which is the best-selling Xbox video game and was by far the most popular online game for years. 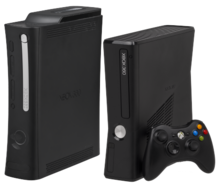 The Xbox 360 was released as the successor of the original Xbox in November 2005, competing with Sony's PlayStation 3 and Nintendo's Wii as part of the seventh generation of video game consoles. As of June 30, 2013, 78.2 million Xbox 360 consoles have been sold worldwide.[10] The Xbox 360 was officially unveiled on MTV on May 12, 2005, with detailed launch and game information divulged later that month at the Electronic Entertainment Expo (E3). The console sold out completely upon release in all regions except in Japan.[11][12][13]

The Xbox 360 showed an expanded Xbox Live service (which now included a limited "Free" tier called silver), the ability to stream multimedia content from PCs, while later updates added the ability to purchase and stream music, television programs, and films through the Xbox Music and Xbox Video services, along with access to third-party content services through third-party media streaming applications. Microsoft also released Kinect, a motion control system for the Xbox 360 which uses an advanced sensor system.

At their E3 presentation on June 14, 2010, Microsoft announced a redesigned Xbox 360 that would ship on the same day.[14] The redesigned console is slimmer than the previous Xbox 360 model and features integrated 802.11 b/g/n Wi-Fi, TOSLINK S/PDIF optical audio output, five USB 2.0 ports (compared to the three from older versions) and special port designed for the Kinect peripheral.[15] Older models of the Xbox 360 have since been discontinued.[16] The first new console to be released features a 250 GB hard drive, while a later less expensive SKU features 4 GB internal storage.

The Xbox One with the redesigned Kinect and controller

The Xbox One was released on November 22, 2013 in North America, as the successor of the Xbox 360. The Xbox One competes with Sony's PlayStation 4 and Nintendo's Wii U as part of the eighth generation of video game consoles.

Announced on May 21, 2013,[17] the Xbox One now has a large emphasis on internet-based features; including the ability to record and stream gameplay, and the ability to integrate with a set-top box to watch cable or satellite TV through the console with an enhanced guide interface and Kinect-based voice control.[18][19][20][21]

Following its unveiling, the Xbox One proved controversial for its original digital rights management and privacy practices; while Microsoft touted the ability for users to access their library of games (regardless of whether they were purchased physically or digitally) on any Xbox One console without needing their discs, and the ability to share their entire library with 10 designated "family" members, all games would have to be tied to the user's Xbox Live account and their Xbox One console, and the console would be required to connect to the Internet on a periodic basis (at least once every 24 hours) in order to synchronize the library, or else the console would be unable to play any games at all.[22][23] After an overwhelmingly negative response from critics and consumers (who also showed concerns that the system could prevent or hinder the resale of used games), Microsoft announced that these restrictions would be dropped.[24] Microsoft was also criticized for requiring the Xbox One to have its updated Kinect peripheral plugged in to function, which critics and privacy advocates believed could be used as a surveillance device. As a gesture toward showing a commitment to user privacy, Microsoft decided to allow the console to function without Kinect.[25][26][27]

Each console has a variety of games. Most games released on the original Xbox are backwards compatible and can be played directly on its successor, Xbox 360. Backward compatibility with Xbox 360 titles was added to Xbox One in June 2015, although titles requiring Kinect or USB peripherals will not be supported.

Xbox Live is an online service with over 40 million users worldwide (as of January 10, 2012).[42] It comprises an online virtual market, the Xbox Live Marketplace, which allows the purchase and download of games and various forms of multimedia. Online gaming on the Xbox first started on November 15, 2002 worldwide. The service is still active and continues to be played by gamers.

The Spring 2007 update to the Xbox 360 Dashboard relocated the Marketplace to its own "blade" in order to bring more attention to the service and make it more accessible to users. Although this has been obsoleted by the NXE update, the section has been implemented into three separate sections in the Dashboard: the Game Marketplace, Video & Music Marketplace, and Avatar Marketplace.

Downloaded content requires enough space on either the Xbox 360's hard drive, or an Xbox 360 Memory Unit. Selected downloads are placed in a queue and are downloaded whilst the console is powered on and is connected to Xbox Live. Users can choose to send certain downloads to the front of the queue to be downloaded first. Downloads are temporarily halted during certain times where games make use of Xbox Live's features (e.g. online multiplayer).

Xbox SmartGlass is a companion application for Xbox 360 available for Windows 8, Windows 10, Windows Phone, iOS, Android (version 4.0 and above)[43] and Windows Server 2012. It was announced by Microsoft during E3 2012 and released on October 26, 2012, coinciding with the release of Windows 8.[44] It connects with the Xbox 360 and allows more interactive entertainment, allowing mobile devices to potentially serve as second screens and remote controller. Currently Windows 8 and Windows RT Tablets and PCs, Windows Phone (7.5 and 8) iOS devices, and Android smartphones (4.x) are compatible with SmartGlass,[45] providing information such as Halo 4 stats and Forza Horizon GPS.[46] Users of Windows Server 2012 can currently download the application from the Windows Store after installing the Windows Desktop Experience feature in the Server Manager.[47]

The Xbox 360's original graphical user interface was the Xbox 360 Dashboard; a tabbed interface that featured five "Blades" (formerly four blades), and was designed by AKQA and Audiobrain. It could be launched automatically when the console booted without a disc in it, or when the disc tray was ejected, but the user had the option to select what the console does if a game is in the tray on start up, or if inserted when already on. A simplified version of it was also accessible at any time via the Xbox Guide button on the gamepad. This simplified version showed the user's gamercard, Xbox Live messages and friends list. It also allowed for personal and music settings, in addition to voice or video chats, or returning to the Xbox Dashboard from the game. 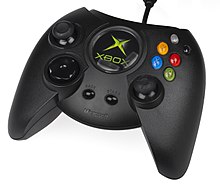 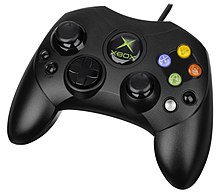 Released in 2001, the Xbox control pad was the first controller made for the original Xbox. The Xbox controller features two analog sticks, a pressure-sensitive directional pad, two analog triggers, a Back button, a Start button, two accessory slots and six 8-bit analog action buttons (A/Green, B/Red, X/Blue, Y/Yellow, and Black and White buttons).[48] The standard Xbox controller (originally nicknamed the "Fatty"[49] and later the "Duke"[50]) was originally the controller bundled with Xbox systems for all territories except Japan. 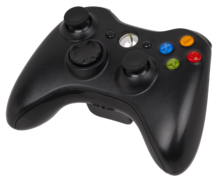 Released in 2005, the Xbox 360 controller for the Xbox 360 succeeded its predecessor. A standard Xbox 360 controller features eleven digital buttons, two analog triggers, two analog sticks and a digital D-pad. The right face of the controller features four digital actions buttons; a green "A" button, red "B" button, blue "X" button and yellow "Y" button. The lower right houses the right analog stick, in lower left is a digital D-pad and on the left face is the left analog stick. Both analog sticks can also be "clicked in" to activate a digital button beneath. In the center of the controller face are digital "Start", "Back" and "Guide" buttons. The "Guide" button is labelled with the Xbox logo, and is used to turn on the console/controller and to access the guide menu. It is also surrounded by the "ring of light", which indicates the controller number, as well as flashing when connecting and to provide notifications. The left and right "shoulders" each feature a digital shoulder button, or "bumper", and an analog trigger.

Kinect (stylized as KINECT) is a motion sensing input device by Microsoft for the Xbox 360 video game console and Windows PCs. Based around a webcam-style add-on peripheral for the Xbox 360 console, it enables users to control and interact with the Xbox 360 without the need to touch a game controller, through a natural user interface using gestures and spoken commands.[51] The project is aimed at broadening the Xbox 360's audience beyond its typical gamer base.[52] Kinect competes with the Wii Remote Plus and PlayStation Move with PlayStation Eye motion controllers for the Wii and PlayStation 3 home consoles, respectively. A version for Windows was released on February 1, 2012.[53]

The Kinect claimed the Guinness World Record of being the "fastest selling consumer electronics device" after selling a total of 8 million units in its first 60 days.[64][65][66] 24 million units of the Kinect sensor had been shipped as of January 2012.[34]

The Xbox One console has a revised controller with forty improvements over the 360's controller. This new controller is built to work with Kinect. The Start and Back buttons are replaced with Menu and View buttons. It has impulse triggers that replace the regular triggers. The button with the Xbox logo will no longer bring up the Xbox Guide as the Xbox Guide Button on the Xbox 360 controller did. The button will now open up the dashboard without interrupting the game currently being played by the user. Once pressed again, the Xbox will resume the game.[73]

The Xbox One Kinect sensor

Although featuring improved performance over the original Kinect, its successor has been subject to mixed responses. It has been praised for its wide angle, its fast response time and high quality camera. However, the Kinect's inability to understand some accents in English was criticized. Furthermore, controversies surround Microsoft's intentional tying of the sensor with the Xbox One console despite the initial requirements for the sensor being plugged in at all times having been revised since its initial announcement. There have also been a number of concerns regarding privacy.