Operating Condition: ​works 100%. The power-button is stuck in the 'on'. This is common thing with Philips machines

In the early 1970s, Magnavox was an innovator in the home video game industry. They succeeded in bringing the first home video game system to market, the Odyssey, which was quickly followed by a number of later models, each with a few technological improvements (Magnavox Odyssey series). In 1978, Magnavox, now a subsidiary of North American Philips, released the Odyssey², its new second-generation video game console.

The original Odyssey had a number of removable circuit cards that switched between the built-in games. With the Odyssey², each game could be a completely unique experience, with its own background graphics, foreground graphics, gameplay, scoring, and music. The potential was enormous, as an unlimited number of games could be individually purchased; a game player could purchase a library of video games tailored to his or her own interest. Unlike any other system at that time, the Odyssey² included a full alphanumeric membrane keyboard, which was to be used for educational games, selecting options, or programming (Magnavox released a cartridge called Computer Intro! with the intent of teaching simple computer programming).

The Odyssey² used the standard joystick design of the 1970s and early 1980s: the original console had a moderately-sized silver controller, held in one hand, with a square housing for its eight-direction stick that was manipulated with the other hand. Later releases had a similar black controller, with an 8-pointed star-shaped housing for its eight-direction joystick. In the upper corner of the joystick was a single 'Action' button, silver on the original controllers and red on the black controllers. The games, graphics and packaging were designed by Ron Bradford and Steve Lehner.[5]

One other difference in these controllers is that the earliest releases of the silver joystick were removable. They could be plugged and unplugged from the back of the unit, while all later silver and all black controllers were hardwired into the rear of the unit itself (although the joysticks still can be easily replaced, but not without dismounting the cover deck).

One of the strongest points of the system was its speech synthesis unit, which was released as an add-on for speech, music, and sound effects enhancement. The area that the Odyssey² may be best remembered for was its pioneering fusion of board and video games: The Master Strategy Series. The first game released was Quest for the Rings!, with gameplay somewhat similar to Dungeons & Dragons, and a storyline reminiscent of J. R. R. Tolkien's The Lord of the Rings. Later, two other games were released in this series, Conquest of the World and The Great Wall Street Fortune Hunt, each with its own gameboard.

Its graphics and few color choices, compared to its biggest competitors at the time—the Atari 2600, Mattel's Intellivision and the Bally Astrocade—were its "weakest point".[6] Of these systems, the Odyssey² was listed by Jeff Rovin as being the third in total of sales, and one of the seven major video game suppliers.

The console sold moderately well in the US. It was one of the three primary consoles prior to mid-1982, though a distant third, after the Atari 2600 and Mattel Intellivision. By 1983 over one million Odyssey² units were sold in the US alone.

To sell would-be customers on its technical abilities as a computer-based console, the Odyssey² was marketed with phrases such as "The Ultimate Computer Video Game System", "Sync-Sound Action", "True-Reality Synthesization", "On-Screen Digital Readouts" and "a serious educational tool" on the packaging for the console and its game cartridges. All games produced by Magnavox/Philips ended with an exclamation point, such as K.C. Munchkin! and Killer Bees!.[7]

No third-party game appeared for the Odyssey² in the United States until Imagic's Demon Attack in 1983.[8] The lack of third-party support kept the number of new games very limited, but the success of the Philips Videopac G7000 overseas led to two other companies producing games for it: Parker Brothers released Popeye, Frogger, Q*bert and Super Cobra, while Imagic also released Atlantis. 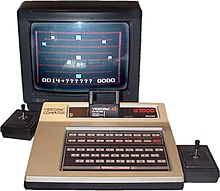 European models had no power button, and black action buttons

In Europe, the Odyssey² did very well on the market. In Europe, the console was most widely known as the Philips Videopac G7000, or just the Videopac, although branded variants were released in some areas of Europe under the names Philips Videopac C52, Radiola Jet 25, Schneider 7000, and Siera G7000. Philips, as Magnavox's Dutch parent company, used their own name rather than Magnavox's for European marketing. A rare model, the Philips Videopac G7200, was only released in Europe; it had a built-in black-and-white monitor. Videopac game cartridges are mostly compatible with American Odyssey² units, although some games have color differences and a few are completely incompatible. A number of additional games were released in Europe that never came out in the US.

In Brazil, the console was released as the Philips Odyssey; the Magnavox Odyssey was released in Brazil by a company named "Planil Comércio", not affiliated to Philips or Magnavox. Since just a few units were sold, the Brazilian branch of Philips released in 1983 Odyssey² without its number. Odyssey became much more popular in Brazil than it ever was in the US; tournaments were even held for popular games like K.C.'s Krazy Chase! (Come-Come in Brazil). Titles of games were translated into Portuguese, sometimes creating a new story, like Pick-axe Pete, that became Didi na Mina Encantada (Didi in the Enchanted Mine) referring to Renato Aragão's comedy character, and was one of the most famous Odyssey games in Brazil.

The Odyssey² was released in Japan in December 1982 by Kōton Trading Toitarii Enterprise (コートン・トレーディング・トイタリー・エンタープライズ, a division of DINGU company) under the name オデッセイ２ (odessei2). "Japanese" versions of the Odyssey² and its games consisted of the American boxes with katakana stickers on them and cheaply printed black-and-white Japanese manuals. The initial price for the console was ¥49,800, which is approximately 500 US dollars. It was apparently not very successful; Japanese Odyssey² items are now very difficult to find.

An open source console emulator for the Odyssey² called O2EM is available. It includes Philips Videopac G7400 emulation among other features. The emulator works on Linux, Microsoft Windows, DOS and other platforms, and is included within OpenEmu for Mac OS X. O2EM, (originally not open source) was created in 1997 by computer programmer Daniel Boris and further enhanced by André Rodrigues de la Rocha.

The open source multi-platform multi-system emulator MESS has Odyssey² support, and is the only emulator to emulate The Voice expansion module without using sound samples.